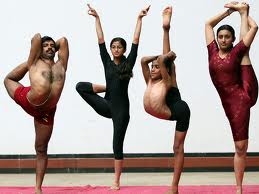 Posted on August 8, 2012 By Kristin @kristinmcgee

I’m really torn over this whole idea of yoga being an olympic sport. I am thrilled when I read about all the Olympic Athletes using yoga to help them in their training. But, I’m not sold on the idea of yoga being in the Olympics. Rajashree Choudhury, wife of Bikram Choudhury, is trying to make yoga an official sport in the 2016 Olympics. I tend to think yoga should not be involved in the Olympics in any competitive fashion.

First of all, the definition of yoga is to unite, to join, to bring together. Competition isn’t about uniting, it’s about separating or forming teams; it’s an “us against them” approach, a measurement of who will come out on top. I think healthy competition is good in many ways, it helps us grow and strive to be our very best in certain cases. But, yoga is a life long practice not a sport. How can you judge someone on their inner journey?

Most sports in the Olympics have an end goal. To get to the finish line, to perform the perfect dive, to jump a certain distance, to score enough points to win a game. There is no end goal in yoga and there is no perfect pose. It’s completely subjective who has a better looking Natarajasana; and you can’t judge a yoga posture from the outside anyways. Yoga is about what is going on inside.

Athletes on teams, gymnast, swimmers, divers, runners, etc. all hit a certain peak and then it’s impossible to maintain their level of training and athleticism forever. Yoga is about longevity, it is a life long practice that doesn’t have an age where you’re no longer able to practice. As a matter of fact, yoga helps us age in a healthy balanced way when done in a safe and mindful way. If the yoga competition were based on contortion, I don’t see how balanced that is.

Yoga isn’t about performing, it’s about informing. We’re constantly informing ourselves more about our bodies, our minds, our relationships. The most important tool we can gain from practicing yoga is becoming our own best friend then learning how to be a good friend to others and to the universe. The idea of judging ourselves against others in a practice that is meant for uniting, just seems like such an oxymoron to me.

I’d love to see yoga remain a tool for athletes to help them focus when they are competing in their sports. I admire the skill, determination, focus, commitment and drive that the Olympic athletes possess. I think yoga is the perfect complement to help them feel connected to themselves and find an inner compass or guide that allows them to know that it’s not about winning or losing, it’s about staying true to oneself and doing the best you can in every moment. It’s also extremely rehabilitating, centering, grounding and therapeutic physically and mentally.

Yoga is an invaluable tool for all of us. I’d rather it not become about a performance; but to allow it to be a lifelong endeavor, one that is much more sacred than who can hold a headstand the longest. If yoga does make it in to the Olympic games, then I do hope it helps spread the positive aspects of the practice and helps to unite everyone world wide–like the Olympic rings symbolically linked together.

Meditating Through Infertility
New Year....Improved You!
Mistakes Can Be Miracles!
"Downward Dog"--A Funny, Sexy, Must Read Book for the Summer!

6 thoughts on “Yoga an Olympic Sport?”