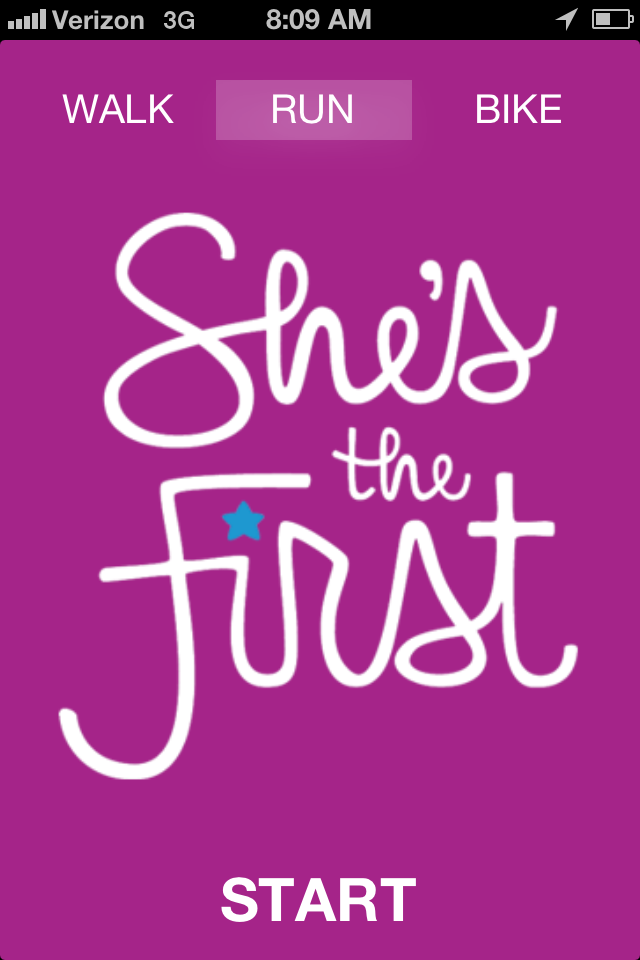 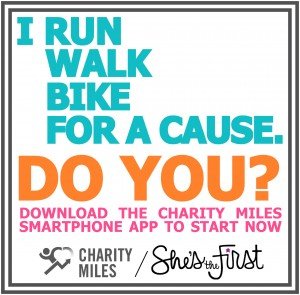 Put an athletic spin on your altruism and stay in shape this summer while supporting an amazing cause! She’s the First, a non-profit organization that sponsors girls’ education in developing nations, has joined with Charity Miles, the free fitness app that lets your track your distance and raise money while you move.

Through the partnership, Charity Miles users will now be able to earn 25 cents for each mile they run or walk, and 10 cents for every mile they bike, and donate the sum to She’s the First with a swipe on their iPhone or Android screen. Every mile of walking and running equates to 25 minutes of education sponsored by She’s the First. 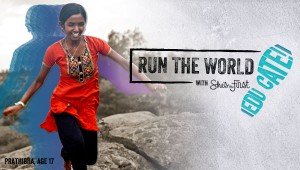 The addition of She’s the First to the Charity Miles platform comes at the perfect time–the organization’s national spring campaign, Run the World, has a goal of raising $50,000 to sponsor 100 girls’ educations within 100 days, by the end of June. “Charity Miles lets even more people get involved in helping us reach the Run the World goal and we’re thrilled to be on it!” said Tammy Tibbetts, founder and president of She’s the First. “The founder of Charity Miles, Gene Gurkoff, and his team have truly built a game-changing app.”

Millions of school-aged children around the world cannot afford an education, and the vast majority are girls. Only 33% of girls in developing nations enroll in secondary school. But when a girl completes her education, she earns a higher income to support her family, raises healthier children, slows the spread of disease, and improves a nation’s economic worth, among many other benefits, research shows. 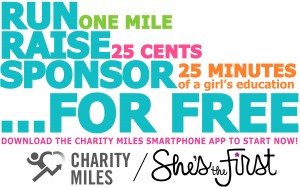 Do something great that benefits your body, mind and spirit while also donating to an incredible cause. To learn more about the campaign, visit shesthefirst.org/runSTF. Stay connected to the organization’s progress and raise awareness by tweeting @shesthefirst with hashtag #RunSTF.

A case of the tinkles...
Arms like Tina Fey's, Abs like LeAnn Rime's & Bethenny Frankel's #1 Stress Reducing Yoga pose
DietBet--Join Me in A Challenge to Tone Up For the Holidays!
Guest Blog: Fitness Tips To A Healthier Summer by Sophie Samuel

One thought on “She’s the First & Charity Miles”