Home / Fitness / S-Factor Workout: Sexy and You Know It!

S-Factor Workout: Sexy and You Know It!

Posted on April 3, 2012 By Kristin @kristinmcgee 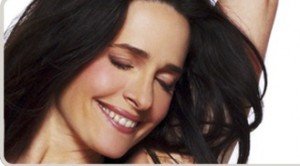 A couple of weeks ago, I took my first ever S Factor class. It was a Saturday afternoon and I went up to the studio in NYC on W. 23rd street for a 2pm “Intro to S Factor”. Next thing I know, I’m in a dark room, with about 9 other women, undulating my hips to Def Leppard’s “Pour Some Sugar on Me”. Our teacher, Kristin, seductively lead us through a warm up that included lots of pelvic circles and thrusts as well as slapping our butts every now and then and rolling around on the floor. It was actually quite physical and at one point she had us bust out a round of 20 push-ups. It felt like a cross between some yoga, a little pilates, old school Jane Fonda butt work, Martha Graham technique and striptease.

After our floor warm-up, we went to the poles. We were all in a circle with Kristin in the middle and 2 girls each got on a pole and practiced the moves Kristin showed us. Practicing on the pole was a true test of my physical strength, core strength and trust in myself to just let go and give it a spin! After learning some tricks on the poles, we learned a wall dance (when I got home, I showed my husband and he was ready to subsidize a year’s worth of classes for me-hee hee) which forced me to really just let loose.

I fell in love with Yoga because of its attention to detail, precision, alignment and focus. I’ve always been the type A perfectionist, straight A student, etc. My mom even jokingly said to me as I left for my first year in college, “maybe it’s a good idea to just drink a beer Kristin, get laid!”. S Factor reminds me that it’s just as important to let go and discover a side of me that is opposite of being so tightly wound. Yoga is also meant to stretch us out; yet I almost went deeper in to my hips in S Factor warm-up, then I usually do in ankle to knee pose. I think the freedom and play is what is sometimes lacking in my yoga practice; and there always needs to be a little of both discipline/alignment mixed with carefree fun and fluid breath.

I had a blast speaking with Shelia Kelley, founder of S Factor, after my experience. I had no idea what a powerhouse of a woman she is and how much she had done prior to creating S Factor and opening studios in NY, Houston, Chicago, SF and various places in Southern California. When Shelia starred in and produced the film “Dancing at the Blue Iguana”, she had to learn how to pole dance and strip tease for her role as Stormy. She said all of a sudden her body transformed and she tapped in to a feminine energy source that changed her life as well. Compelled to share this with other woman, Shelia combined her knowledge of ballet, exotic dance and exercise to create the S Factor workout. Shelia is a fellow NYU Tisch School alumni. She has starred in many TV shows (currently in Gossip Girls) and films.

I’m getting better all the time and definitely finding more and more ease in my yoga practice, body, mindset and life. Taking a class like S Factor was a great eye opener for me. It showed me how this kind of work can also help open me up to all of myself and to embrace my femininity. Sometimes the style of yoga I practice and teach can be very rajastic, masculine, powerful and strength based; after taking S Factor I want to keep adding more of the tamasic, feminine, sensual aspects to my practice; and to my life as well.

Shelia Kelley has some wonderful DVDs (if you don’t live in a city that offers classes), and she also leads Soulfully Sexy retreats.