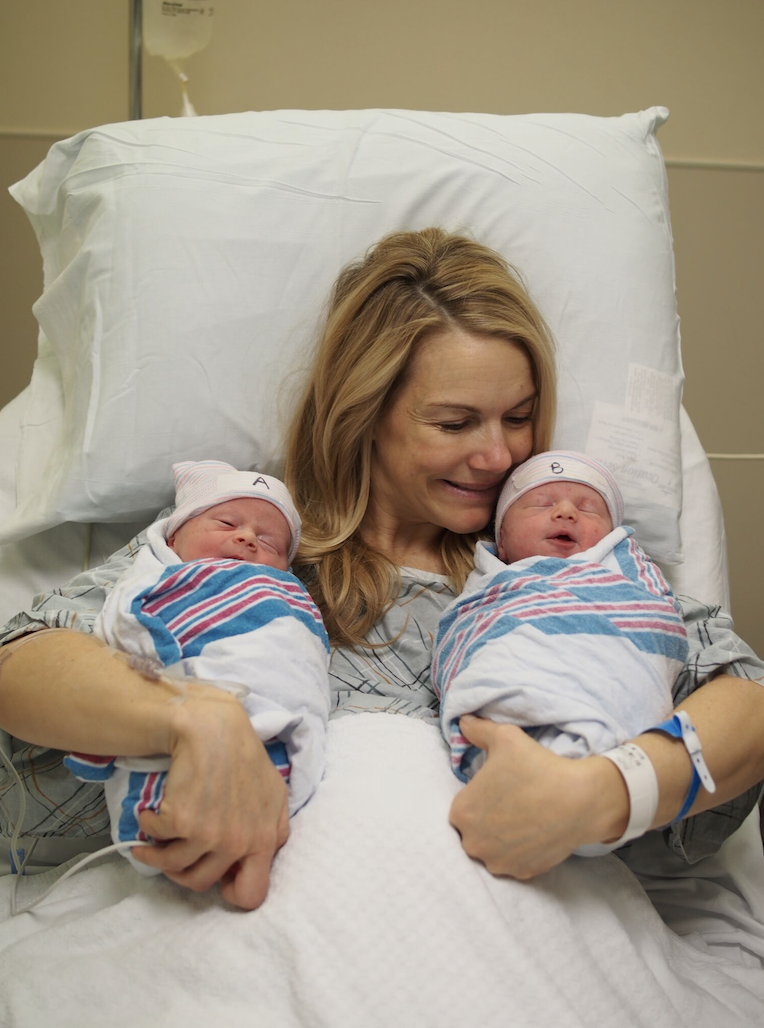 Posted on October 4, 2018 By Kristin @kristinmcgee

My husband always jokes, “We were trying for a girl and ended up with two more boys!”. When I found out I was pregnant with twins, I was thrilled, shocked and pretty overwhelmed. I was quite sick the first trimester because of the influx of hormones. I had a tiny bit of morning sickness with Timothy; but nothing as bad as this time with the twins.

Once I made it past the first trimester, I just remember having more cravings (hello doughnuts) and not being quite as active. I had to modify a bit more and not push it. I still moved and did some yoga and Pilates; but not as intense as I had when I was pregnant with Timothy.

I made it to 38 1/2 weeks which is quite uncommon for moms pregnant with twins. Dr. Calipari and I were still on board for a natural delivery until he did my pelvic exam and felt a foot instead of a head. On the ultrasound, it showed Robert’s head first; but when he did the internal exam, he felt an appendage.

He sent me home and said, “let’s give it a day and see if anything shifts”. I prayed Robert would and my mom and I went on a walk and I was hoping I would just go in to labor and it would work itself out. Saturday morning I was due in at 10am to see Dr. Calipari. He did the ultrasound and sure enough Robert was head down and and first thing he saw. He did the pelvic exam and much to my disappointment still felt a foot. The boys were fighting to come out!

We both agreed it wasn’t worth the risk and he made the decision to keep me at the hospital fasting and monitored for a C-Section delivery that evening at 5pm. I called my husband who came over to hang out with me at the hospital while my mom took care of Timothy. That was one of the hardest parts was just sitting and waiting and breathing. I went through phases of nervousness, excitement, hunger! The doctor told me I was having mild contractions; but I didn’t feel much. I wish I could have waited another week even to see what might have happened. 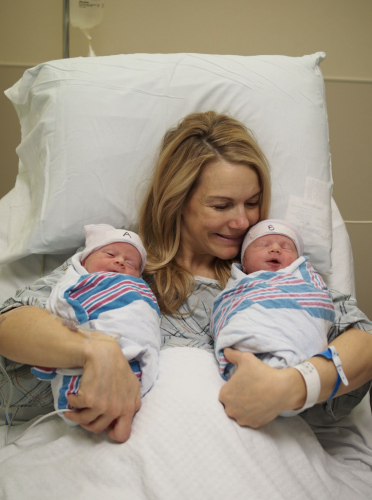 The Twins Were Born

At 530pm they wheeled me in to the operating room. It is so different having a C-Section instead of a natural birth. Everything feels so clinical. I had to fold forward for the big spinal numbing which was maybe the only somewhat painful part. Then I laid back and once the drugs set in, the doctors went to work. I asked them to play James Taylor and I felt a bit nauseas at one point. Having a C-Section is somewhat similar to being at the dentist, you feel the tugging and pulling without any pain. It’s a very surreal experience. I felt so awake and aware and alive when giving birth to Timothy; and with the twins it felt more outer body.

Well ironically, William came out first and soon became baby A at 631PM and Robert followed at 632PM. Dr. Calipari was right William was on his way out ahead of Robert and we made the right decision. Once I saw those little boys, my heart melted. I couldn’t stop crying.

Recovery from a C-Section is harder I think. I felt more pain and couldn’t move quite as quickly as I could with a natural childbirth. It’s kind of cool I got to experience both and I can relate to women who’ve gone through the different processes. 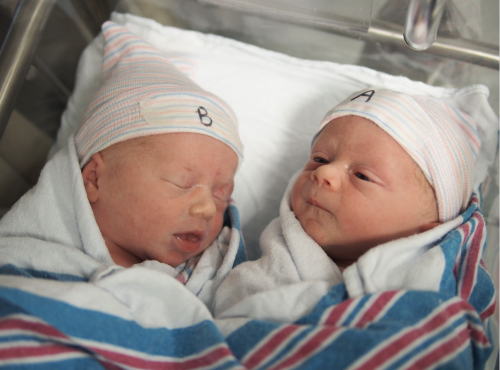 I listened to my body and started little movements that felt good, such as pelvic tilts and bridges. I did TVA breathing and light stretching as well. After both pregnancies, the more I moved, the better I felt. I would take walks with Timothy around Central Park and with the twins I did a lot of fun mommy and me moves where I held them like little weights.

Nursing made me extra hungry; but I opted for healthy, nutrient dense foods. I started working on my meal plan for other mamas after noticing how I could still eat super well and nourish my body as well as my babies. I think it’s important to give it some time especially in the first few months. By month three or four, is when I was really feeling ready to get back in shape. By month six, I was starting to feel much more life myself. After having twins, though, I think it took a good year to finally be back to what I was used to.

Orgain, My Favorite Protein Shakes & A Great Cause
Enlightened--The Good For You Ice Cream
Celebrating Small Victories Within Your Yoga Poses- Physically and Mentally
3 of My Top Favorite Moves from My 21 Day Get Your Body Back Plan!