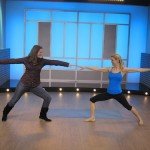 Posted on January 12, 2012 By Kristin @kristinmcgee

Thank goodness for Alex! She is my incredible translator on set here at CoachClub. I completely admire her total fluency in both French and English. She helps me with each script and learns my routine as I write it on the board so she can let Olivier, our awesome director, know when I am standing, sitting or lying down on my back. She can also tell him while we are filming if I say something absolutely ridiculous so he can cut. I hear myself talking so much as we shoot many DVDs back to back in one day, I’m surprised she hasn’t told him to cut more often!

Alex has a really cool back round–her dad is American and was a traveling musician who met her French mom in France. They lived in San Francisco (where Alex was born) for 3 years then moved back to France. Alex grew up speaking French in her home and English in school when they lived in the States, and English at home and French in school, in France.

Alex has really been a lifesaver this trip. She does more than translate, she helps me stay calm and focused, she directs me a bit, and she tells me when a routine went well and how I can make each one better. She has such an easy going attitude and can easily relate to me and to my  French team. She is teaching me French and I am teaching her Yoga. By the end of the trip, I will be saying “comment ça va?” and other French phrases easily, and she’ll be striking her Warrior poses like a pro!